There have been a couple close calls, but I’m happy to report that the kids and I have officially survived over a month of being together every. single. moment. of. every. day.  Oh sweet summertime.  Between the arguing, whining, and pretending like they can’t hear me when I talk, we’ve actually had some great times.  The jar system has been working out well and with that along with day-to-day activities, we have:  gone to Dinosaur State Park, the beach a couple times, a touch-a-truck event, several birthday parties, my parents’ summer house many times, a handful of dinners with families, the gym a few times (always interesting with the kids by my side.  Or back.  Or front.  Or under my feet), the library a couple times, a Raffi concert, Great Wolf Lodge, raspberry picking, visit Gramma and Grandpa Duke, The Dinosaur Place a few times, and my husband’s work two times.  We have painted with pudding, squeezed in a quick round of miniature golf, eaten at “the cat place” aka Two Wrasslin’ Cats, gone to a local farm/ petting zoo, visited another local farm to get chocolate milk and feed cows, built items at The Home Depot, had friends over, gone to the science center two times, enjoyed a couple concerts on the town green, gone to Gillette’s Castle the long way via ferry, and visited a submarine museum.  We even snuck in a doctor’s appointment or five in there.  Phew.  It’s hard to believe that we have also had scheduled days home to do nothing and are home almost every afternoon to just enjoy each other and our own yard.  I don’t doubt that I’ve forgotten about half of what we’ve done on top of the listed. It honestly hasn’t been all bad so far, not even half bad.  Sure, the kids bicker nonstop and I’ve gotten hit in the head with mysterious flying shoes while driving to and from our excursions more times than I can count, but some days have been perfect, even with a bit of sibling rivalry thrown into the mix.  Our visit to the Ecotarium in Worcester, MA was just that; perfect.  Leilani picked it out of the jar for this upcoming week, but I evaluated our calendar and decided we could squeeze it in over the weekend.  It isn’t often that my husband joins us on any of our summertime adventures (something about work?  I’m not quite sure.  It’s not really in my wheelhouse).   On Friday around 10pm, I decided that we would go to the Ecotarium Saturday morning as a family.  We typically get an early start because the kids are bright eyed and bushy tailed before the sun has a chance to greet the world and naptime is a very sacred time for me come mid-day.  However, even I, Mother Moroch and Queen of Predictability, can mix it up every now and again.  I decided to be selfish and stick to my plans of heading to the gym on Saturday morning, so we didn’t end up leaving the house until mid-morning.  I was anxious about what the late start would bring and fully expected to have a quick visit in Worcester as the kids started to breakdown, since we were slated to arrive just an hour before naptime usually begins.  Not to mention that this is what I was working with as we asked the kids to get in the car… 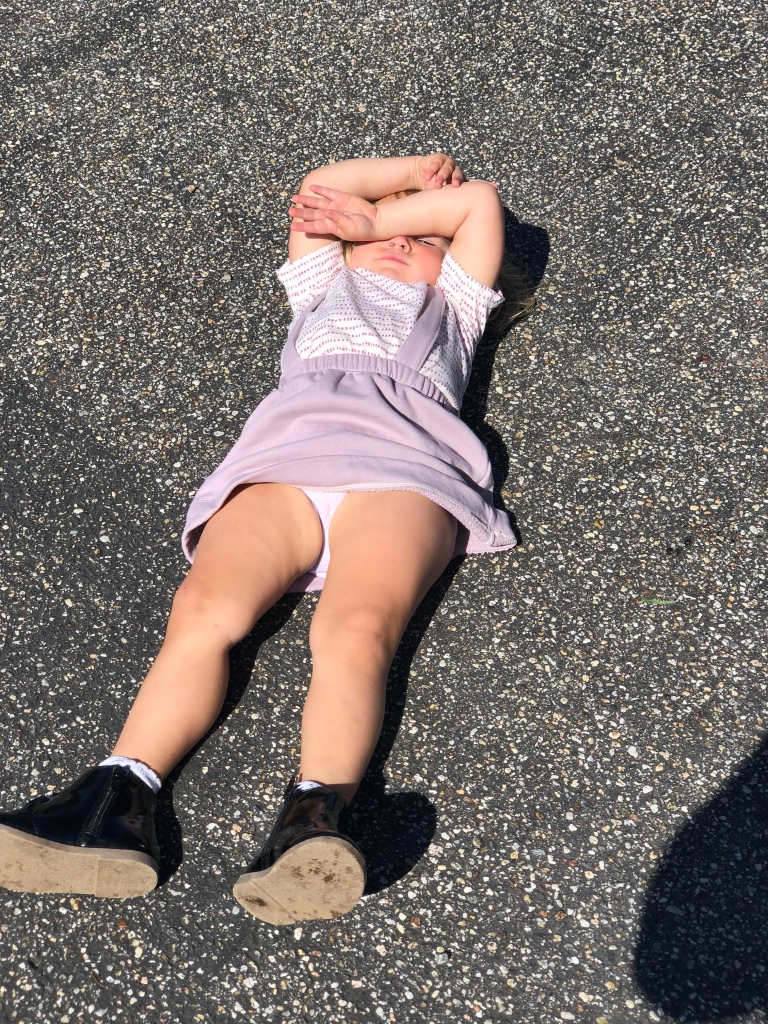 I wasn’t aware of it at the start of the day, but it turns out my kids were going to surprise me and follow my lead on unpredictability.  We ended up staying at the Ecotarium for over four hours, and the kids desperately wanted more.  The inside was your typical science center/ kids’ museum type of place.  It was interesting, engaging, and had several hands-on and unique activities.  I had heard from a couple of people how great the place was, so I was constantly on the look out for opportunities to talk up the exhibits to the kids while really trying to convince myself that it was the coolest place ever. 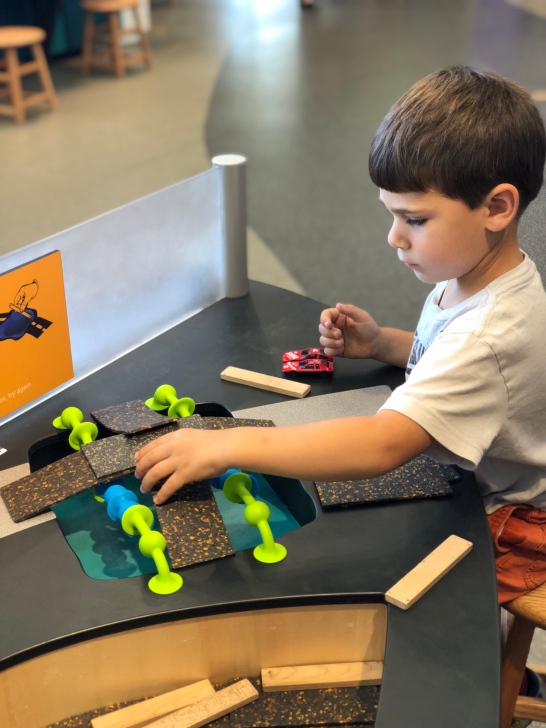 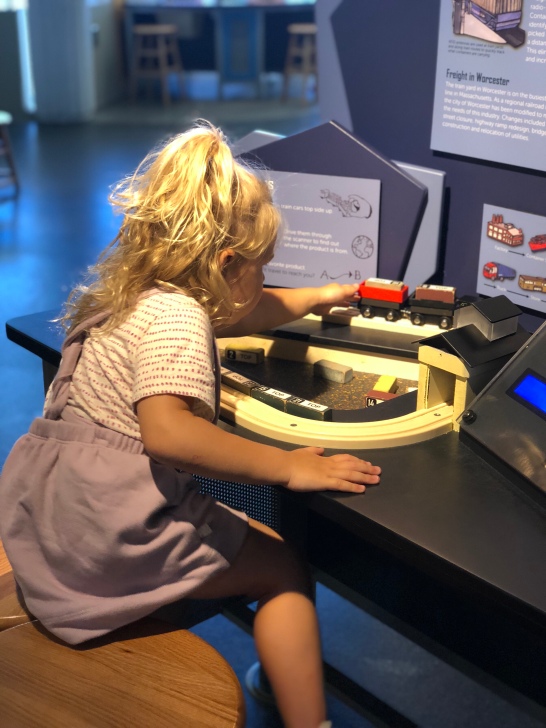 I stopped trying to psyche myself up when we stepped outside.  The outdoor of this place is amazing! The play area outside is nature based with a stream running through the middle, abundant mud kitchen supplies, a water pump, instruments, a climbing net, and so much more.  I was completely awed by the area and quickly envisioned it being a place we could return where my kids could be so enthralled that I could sit on one of the many benches and read a book, without a second thought as to what my kids were doing, if they were behaving, or if they were having a good time.  Of a little less importance, there is also a large area for bubbles outside, and who doesn’t like bubbles? 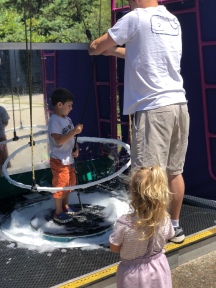 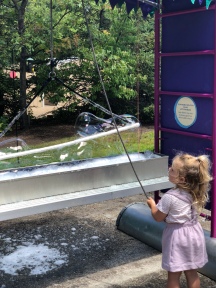 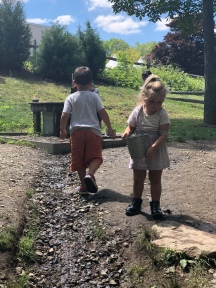 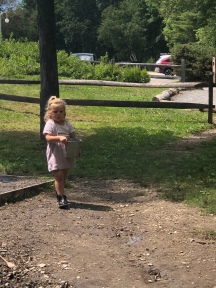 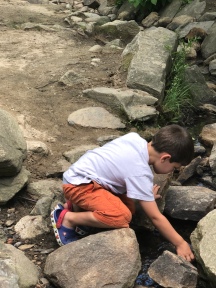 (I apologize for the lack of photos portraying the amazingness that was the outside area.  I was caught up in watching the kids and playing with them that I didn’t snap many pictures.)

As if the “playground” wasn’t enough, we ventured off onto the nature trails, which I quickly discovered no one else had added to their to-do list that day.  It didn’t take long after we arrived at the pier that we discovered an alligator snapping turtle which propelled us into a hunt for more aquatic creatures. 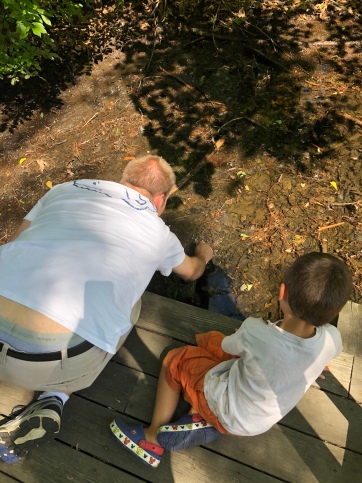 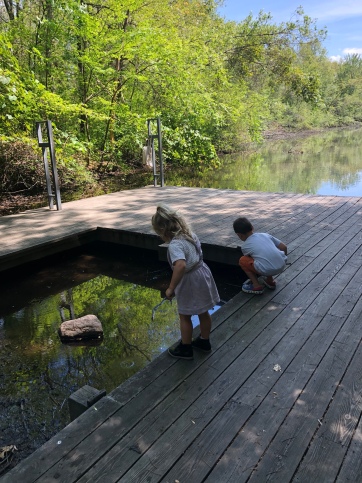 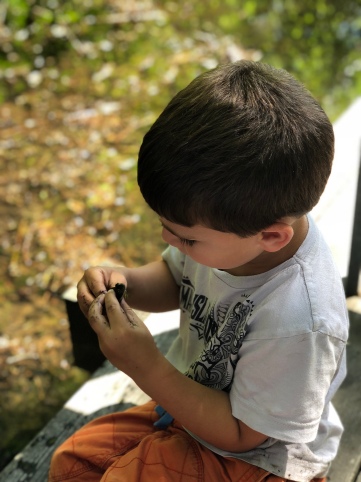 We took the loop around the pond where I proved to the kids (*cough* Phil) that I was brave and had no reservations about walking and jumping on a downed tree hovering over the pond to aide in the quest for frogs. 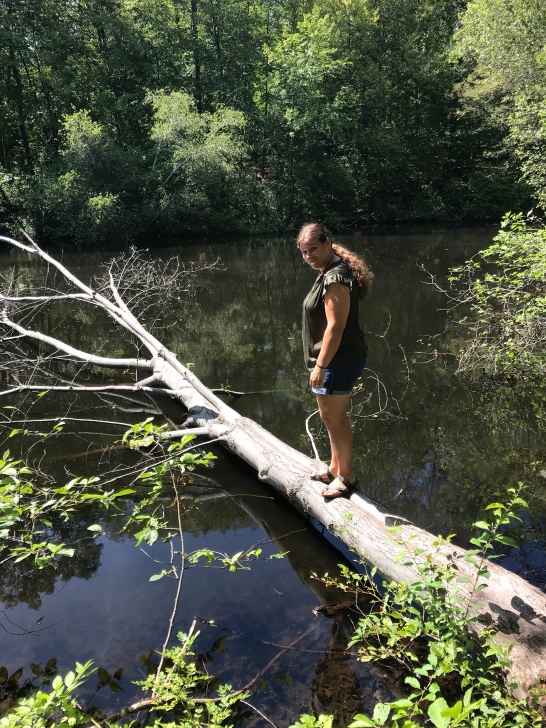 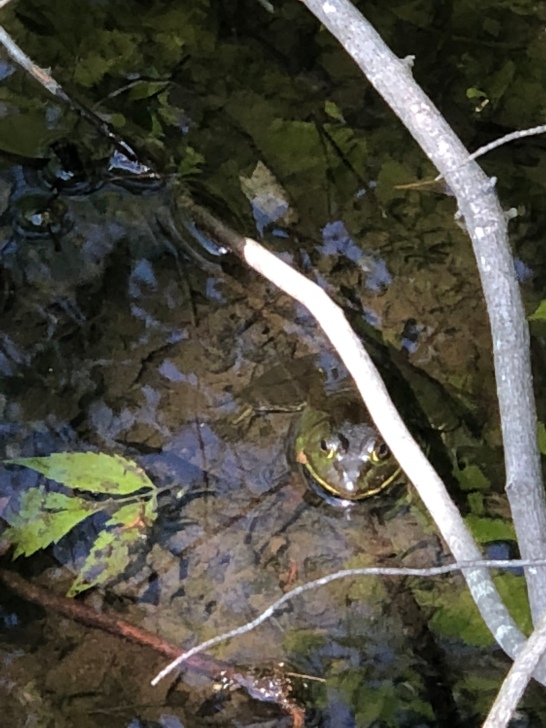 Halfway through the loop there was a pavilion and the view was breathtaking.  If I wasn’t being hypervigilant of the time and counting the seconds until an inevitable meltdown, I would have sat forever with my family while looking out at the sunny sky and perfect reflections projected onto the water. 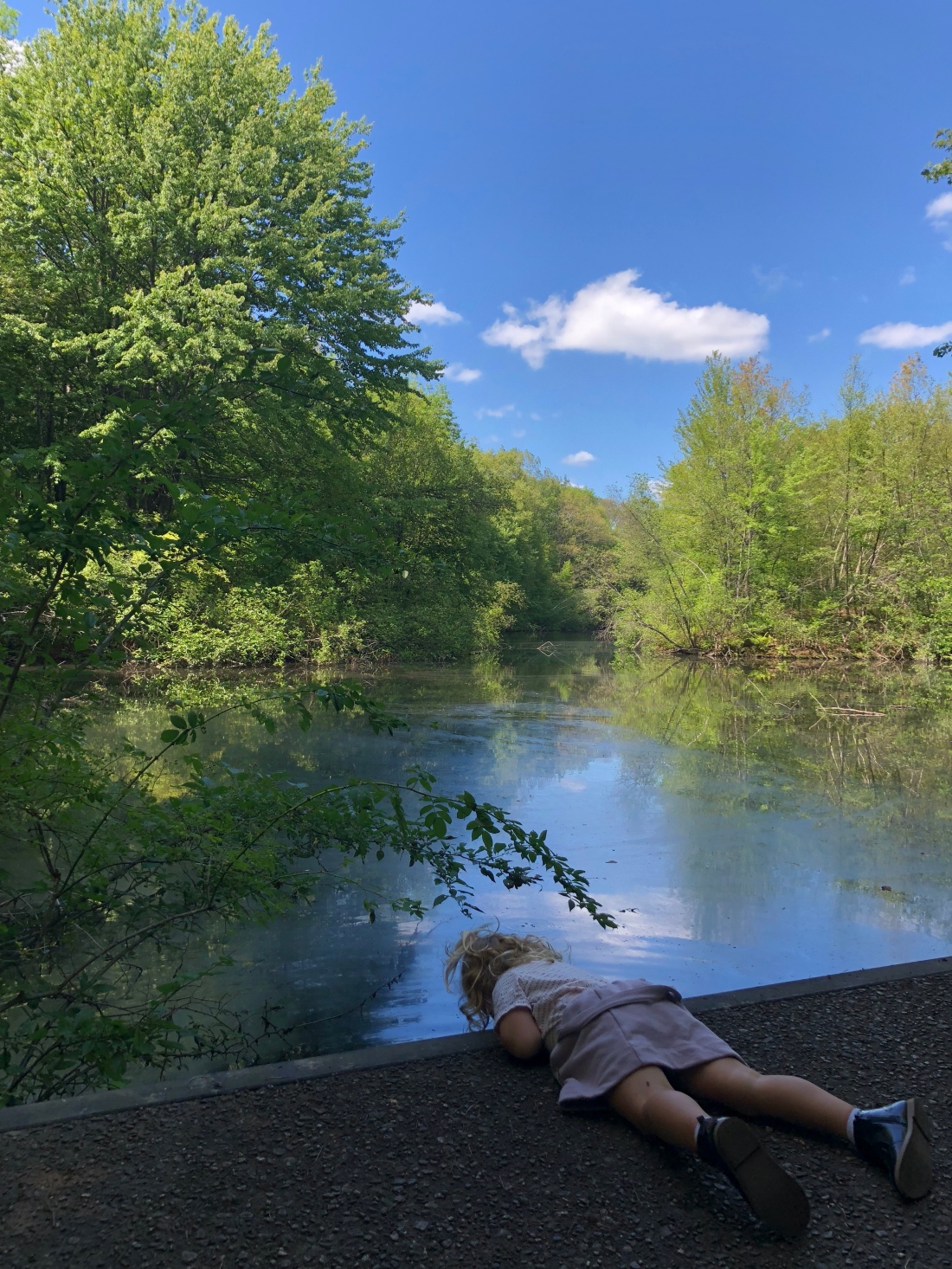 I know it sounds absurd to want to drive over an hour to pay admission to a place just to be outside, but that’s exactly what I’m planning on doing in the very near future.  I plan to return with the kids with a disclaimer before we go that we will not be entering the museum portion and spending our time solely outside.  After all, as it was time to leave, Carson told me he didn’t want to go, wanted “to come back to the Ecotarium real soon”, and later told me that his favorite part was the stream running through the playground.   Oh, and did I mention that they have a train you can ride with a pretty sweet tunnel you’re encouraged to yell in?  That was Leilani’s favorite part. 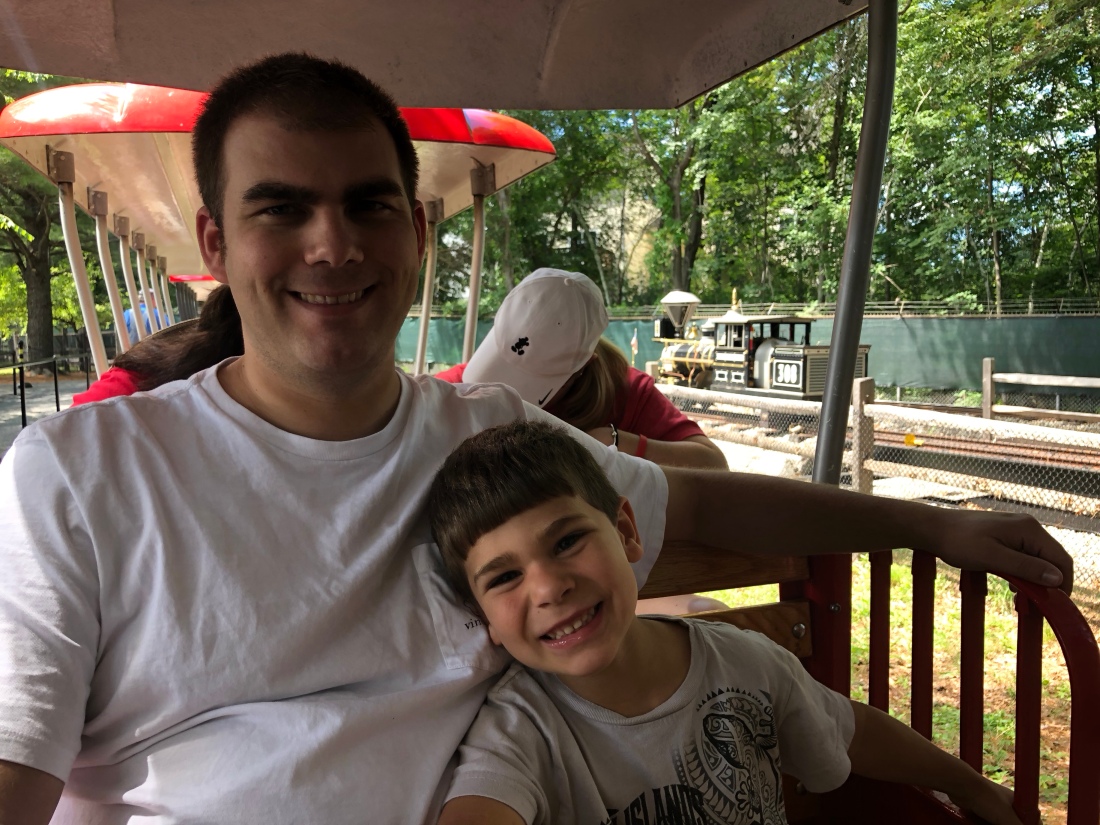 When you find a place that both kids can keep their acts together despite missing naps, you know you’ve found a true gem.  I added it to our unofficial summer bucket list based off of a couple simple personal reviews of “the place is definitely worth a visit”.  I didn’t do my research at all, and still haven’t looked on their website, but living on the edge didn’t disappoint and we had an amazing day as a family.