My son likes to wear dresses and he loves a good twirl. 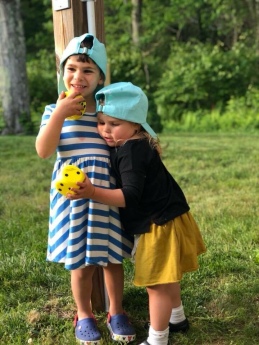 He has more options, but apparently I don’t take his picture on those days.

It all started last December when I showed him some sweatshirts on my phone and asked the question, “which one do you like?”.  I was trying to see which color sweatshirt he wanted, but he scrolled past the sweatshirts and unequivocally exclaimed “This one!”.  I looked at my phone and saw that he was pointing to a pinafore.  I remember the whole thing vividly.  I remember where I was sitting, where he was standing, how I couldn’t see the phone at first because it was angled away from me, me thinking about how I didn’t like how my mostly screen-free kid was scrolling my phone with ease, and how I didn’t want him to talk too loudly because his sister was sleeping.  I started to say no to him and redirect him back to the sweatshirts.  I even heard myself say the words “You can’t…” and then I trailed off.  It may seem insignificant to some, but I’m thankful that I caught myself in that split second and recognized that this was a pivotal parenting moment for me, as well as a moment for me to exercise how to be an accepting, open-minded person.  Instead of finishing the sentence that I started, I asked him to scroll through everything and tell me everything he might want.  He scrolled through three times, each time picking out only one item.  I immediately realized a couple of things as I was sitting on my bed talking to my son and trying not to wake my daughter from a nap:

-Clothes are clothes.  What does it matter what my son wants to wear?  Will his body be covered?  He has a pink sweatshirt, how is this fundamentally different?  The answers seemed simple.

-I wouldn’t have hesitated if my daughter had asked for something like this.  I would not have thought to say “no” to my daughter if she asked for a truck shirt.   She had worn Carson’s stereotypical boy hand-me-downs with a smile on her face and I didn’t question it at all.

-If I didn’t agree to getting him this pinafore, I was sending him clear messages.  I would be conveying to him that it wasn’t okay for him to wear dresses, think for himself, be confident in his wants and needs, that it’s acceptable to make others feel poorly about what they like, and that he should make sure to conform to societal norms rather than forging his own path.

I’m not exaggerating when I say that this all happened instantaneously.  So instead of telling him he had to choose a sweatshirt, I acquiesced.  If only I could have captured the look on his face a week later when the package arrived and he shouted, “That’s my dress!  Leilani, you got one too!  We can match!”   He was eager to wear it to school, so as soon as it was washed and ready that’s just what he did.  I never thought twice about him wearing a dress after I placed the order, so I was caught off-guard when we were a couple hundred feet away from our driveway on the way to his preschool with my carefree, dress wearing son in the backseat, when I realized that this might not be a positive experience for him.  Carson isn’t fazed by much, so I didn’t want to make a big deal about it, but I also didn’t want to send him blindly into a war zone.  I quickly had a conversation about who typically wears dresses but that it’s okay if other people do too.  When I picked him up from school I hesitantly asked him if anyone had said anything about his dress.  I was careful not to have a positive or negative connotation, just an unassuming inquiry.  He stated that one person told him boys don’t wear dresses and he responded, “But they can!  I am!”  And that was that.  I was proud of him for sticking up for himself and grateful that his four-year-old spirit wasn’t ripped apart that day.

Carson has taught me a lot since getting that dress in December.  He plays blissfully when he’s wearing a dress, hops around without a care in the world, and lives for a respectable twirl.  He has shown me that how a person chooses to express themselves physically has absolutely no bearing on who they are at their core.  Maybe this seems obvious and I should have had this epiphany long ago, but I’ve had a couple decades to be shaped by societal norms and he has had less than five years to be tainted.  He has taught me that I can be confident in wearing whatever I want (hellloooo accidental romper purchase) by not thinking twice about where he is going or who will see him when he chooses a dress for his outfit for the day.  He never thought twice about it.  Until he did.

A couple of weeks ago he made a comment out of nowhere about how he wasn’t going to wear dresses to kindergarten a lot.  He told me he would sometimes, but not as often has he has been.  If he doesn’t want to wear dresses, that’s fine.  This certainly isn’t something I’m forcing him to do, but rather something I’m supporting him on and giving him options with.  I followed up with him because I wanted to understand his thought process in deciding that now was a good time to scale back on his frequency of dress wearing.  His reply crushed me, and my heart sank; it was one of those moments that you can literally feel in your chest as your eyes well up.  He told that he wasn’t going to wear them as much anymore because he wasn’t sure if his kindergarten teacher would know that it was okay for boys to wear dresses.  Why had this crossed his mind?  Why was my four-year-old sitting in front of me being concerned about what other people think?  Had someone mentioned something to him?  My mind was racing.  I found myself equal parts concerned, furious, and sad.  I didn’t know which emotion to pursue, and I didn’t want my son to see that his simple assessment was something of importance to me, so I jumped ship and didn’t press the conversation any further after reminding him that he could just tell anyone with any questions that it was okay that boys wear dresses and that everyone can wear what they want.

As a parent, the only interactions I’ve had regarding him wearing dresses have either been positive or neutral.  I’ve observed some looks, but nothing scathing, and I’ve chuckled to myself as I’ve watched people struggle with which pronoun to use regarding my son.  Mostly I have been surprised by the outpouring of positive comments and uplifting conversations that would not have otherwise taken place; conversations at doctor’s offices, the gym, playgrounds, children’s museums, dinner, Facebook, and more.  Lots of people have told me I’m a good parent and that they aspire parent similarly.  I assure you all that I’m simply trying to raise my kids with admirable values, ones I think any parent would want for their kids.  I’m not any better of a mom than anyone else, and this topic doesn’t dictate how good or faulty my parenting style is.  What it does is portray if I’m a decent human being and if I’m encouraging my kids to be the same.  Most importantly, I want my son to realize that his primary responsibility is to be kind, always.  If he decides tomorrow to never touch a dress in his life, I want him to continue with a gentler view of people and learn to not only accept people for their differences but embrace them.  My hope is that when he starts to talk negatively about a kid at school who likes something he doesn’t like that he will engage in a conversation with me that reflects on choices he has confidently made and that everyone has different desires but they all have feelings and deserve to be treated with kindness.  Overall, I have been in awe at how I haven’t felt chastised in my parenting decisions and inspired by the general acceptance of people and their support of both my son and me.  Until I wasn’t anymore.

Picture me dancing around on cloud nine because I finally found a parenting decision I’m confident in.  Then picture me making one misstep and plummeting down, while not even attempting to grab onto anything.  That’s basically how it happened, and now I mope around with my face bruised in private but disguising my wounds to the outside world in attempt to save face.  First, I had to deal with wondering if I handled my son’s reservations as I should have, and then I realized that one person I’m very close to and that my son idolizes is indirectly discouraging my son from dressing as he wants.  It caught me off guard.  So off guard, in fact, that it took me two days to pick up on and I haven’t talked to anyone about it.  By not being assertive and talking to this person I am not being an advocate for my son, nor am I living by those core values that I strive for my kids to have.  I know that communication about this is paramount, and yet I haven’t done it.  To be honest, I likely won’t.  I’m a coward and am not even attempting to stand up for my son.  Knowing that gives me a pit in my stomach, but confrontation is a scary venture that I’m not prepared for yet.  I always tell my kids that my job is to keep them safe, whether that be emotionally or physically.  I have one job, and I am failing at it, but I vow to get the courage to eventually have a much-needed conversation with this mystery person.  It’s the best I can offer for right now.

I’m happy to report that Carson wore a dress to kindergarten today.  Turns out my kid has infinite more bravery than I do.

I don’t think I ever fully understood what it meant to have your heart walking outside of your body until today; here I was sending my son on a bus with kids ranging in age from four to eleven wearing something that just weeks ago he had verbalized his hesitation about.  We chatted very briefly about how to react to potential comments, as I didn’t want to draw too much attention to it, and then he was on his way.  I worried all day about him and how he might be affected.  I’m proud of not only Carson, but of the teachers, kids at the school, and parents in our community.  Carson shared with me that a couple people made comments, but his soul is still intact, and it seems like the comments came more from a place of curiosity than hostility.  I am honored to be surrounded by such a positive community and to have my kids have other people they can lean on and learn from.  While I struggle with lots of parenting decisions and have made some recent clear-cut poor decisions, I am confident that the literal and figurative villages surrounding my family will help guide my children to be caring, kind, and successful with their emotional intelligence.