This blog was supposed to include our undisclosed summer activity from yesterday as well as today’s, but I just couldn’t do it. Today’s activity deserved a post entirely of its own. You know those moments when you are unequivocally and genuinely happy and you smile so much your cheeks hurt? That was today, one hundred percent. Last week when it was time to pick the summer activities out of the (at the time) bag, my daughter picked “painting with pudding”. My original thought for this activity was to give them paintbrushes and either let them paint a picture on paper or paint their bodies with some pudding. I think it’s safe to say that my vision for the activity escalated. I quickly morphed the activity to “give the kids a bunch of pudding and just let them go ham” to adding in some whipped cream, a pudding slide, and a touch of “just let go and not care what happens”. The result was one of the best times I’ve ever had with my kids.

Let me start at the beginning…

We went to the store the other day and picked up two gallons of milk and more pudding than anyone has ever purchased in one trip before. We decided together that chocolate would be the majority, but we’d add other colors in to mix it up. Ultimately, we ended up with sixteen boxes of pudding in four flavors/ colors (don’t worry, don’t worry. We didn’t use all of it. My son decided we had too much and opted to not use one of the vanilla packages and one of the chocolate packages. And now we get a bonus activity of making pudding pops (of shots. Depending on if I like my kids that week or not.)). 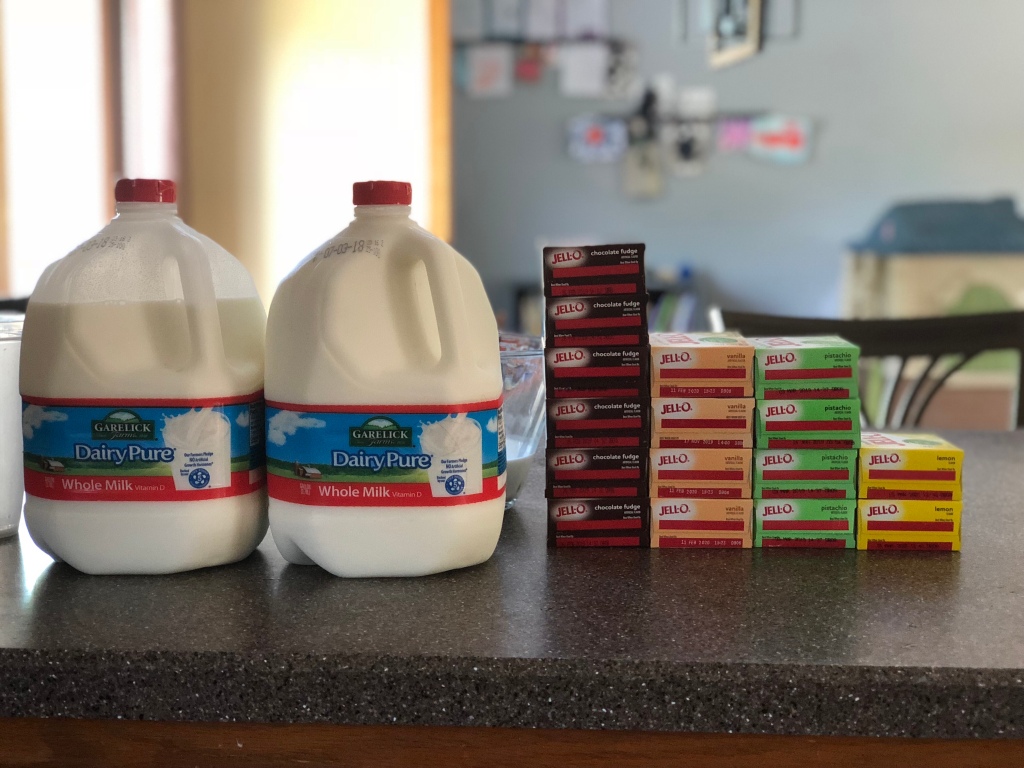 I think the only reason my kids went down for naps yesterday without fighting me at all was because they knew they were going to make pudding when they woke up. Out the door went my clean counter (but hey, it was cleared off for a full 20 minutes. That’s gotta be a record, right?) and in came pudding mixture evvverrrryyyywhere.

One thing I enjoy doing is including the kids when I have prepping to do for projects, meals, etc. Yes, it adds more work, to an extent, but it’s also really helping me and them. It’s helpful to me that I don’t have to be in a different room yelling at them or checking in on them constantly and I strongly feel it’s beneficial to them to be learning practical skills. Even though the mess was greater than if I did it all myself, my kids were happily occupied for a while, weren’t fighting, became invested in the activity for the next day, were learning how to measure, worked on pouring skills, had to mix, fit covers to appropriate sized containers, think about if the remnants belonged in the garbage or the recycling, and used towels to wipe up the counter. I really can’t see anything negative or off-putting in any of that.

Anyway, when we finished up I realized I’d be a terrible mother if I didn’t let them taste test the pudding. They each got a small sampling of each of the four flavors before jumping into action with outdoor play to finish out the day.

Now let’s get to the good part. Oh my goodness. This morning was SO MUCH FUN!!! My friend Kelly came over with her two boys, Garrison and Preston (commit these names to memory, we are around them a lot). Kelly opted to stay relatively clean and to help guard baby Preston from what was about to ensue. She was the designated photographer, but she ran into a problem or two. Apparently when fourteen boxes of pudding are put into the hands of a four, three, and two-year-old, pudding will get everywhere. Who knew? So, her phone was all sticky and was lagging when she went to take a picture and she couldn’t see what she was snapping at. Regardless, she captured the pure joy we were all experiencing, and they really do speak for themselves.

Before the mayhem truly began 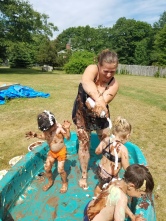 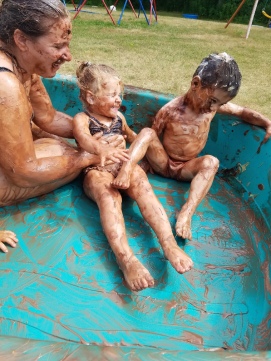 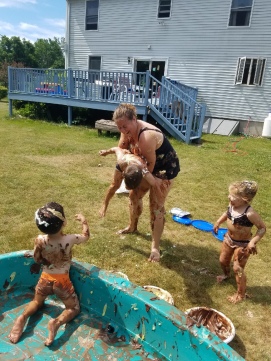 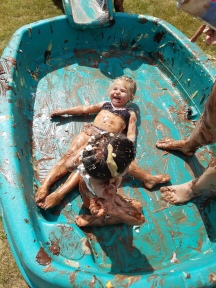 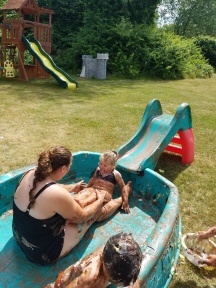 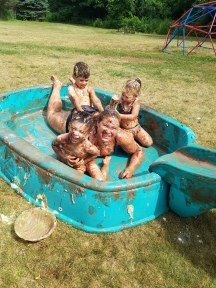 When we finally decided we were done, we sprayed the kids off with the hose, but pudding was caked on and in every orifice of our bodies, so I shuffled them all into the shower. Let me see if I can adequately describe the scene of my bathroom to you; if you could take the aroma of hot cocoa and mix it with the visual of Buddy the Elf taking a cocoa shower, that’s what my bathroom was like. It was as if a chocolate volcano erupted in my bathroom. I imagine that if anyone wanted to massacre chocolate bars at the Hershey Factory that it would slightly resemble what my bathroom looked like today. The floor, shower curtain, the tub, the bathroom walls…everything was covered. The added touch? Grass started to clog the drain and there was a mud river that ran off the kids and down to the drain where a chocolate pool collected. I scrubbed the kids vigorously, but I have no doubt that they smell like rotting milk right now and have pudding hiding in places I don’t want to look. In fact, over three hours after we finished this whole debacle, I fished a glob of dried pudding out of my own ear. A huge shout out goes to Kelly for aiding in the outdoor cleanup of today. As I was trying to get the kids to not look like dirty Oompla Loompas, she was busy ignoring her hungry infant while she sprayed down every surface of my backyard. She’s a true hero.

Ever since giving birth to my daughter and being face-to-face with severe postpartum depression, it’s unusual for me to be in the moment with my kids and enjoy them like I want to. Today was completely effortless though. Today, we were all rolling with laughter (and in pudding), we were flinging pudding at each other, sneak-attacking pudding onto each other’s heads, shooting whipped cream at one another, making pudding angels, going down pudding and whipped cream slides, washing each other’s hair with pudding shampoo, and just genuinely having the time of our lives.

“Painting with pudding” is not only going in the jar for next summer, but it is going down as one of my favorite memories with my kids. I hope these are the moments they look back on as they get older and remember how much fun we had and, of course, how much of a cool mom I was.

P.S. In case anyone reading this isn’t the sharpest tool in the shed, you may want to forego this activity if any of your kids are allergic to milk.